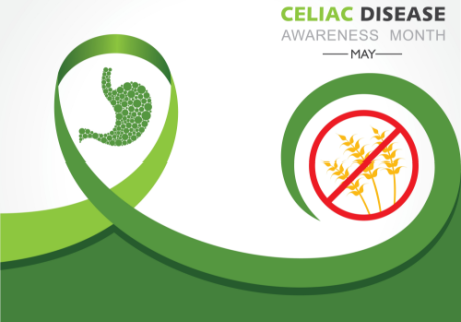 Celiac disease is a genetic, autoimmune condition in which eating gluten (a protein found in wheat, rye, and barley) causes damage to the small intestine. If you have celiac disease and eat gluten, over time, the immune reaction to eating gluten creates inflammation that damages the small intestine's lining, leading to medical complications. The damage to the villi, small finger-like projections that line the small intestine, promote nutrient absorption and prevent absorption of some nutrients (malabsorption). Testing for Celiac Disease is key to avoiding medical complications.

Testing for Celiac disease
Celiac disease affects one person out of 100 people and the classic symptom is diarrhea. Other symptoms include bloating, gas, fatigue, low blood count (anemia), and osteoporosis. People with celiac disease have a twice greater risk of developing coronary artery disease and four times greater risk of developing small bowel cancers. Untreated celiac disease can lead to the development of other autoimmune disorders like Type I diabetes and multiple sclerosis (MS), and many other conditions, including dermatitis herpetiformis (an itchy skin rash), anemia, osteoporosis, infertility and miscarriage, neurological conditions like epilepsy and migraines, short stature, heart disease, and intestinal cancers. So, if you have symptoms, it is very important to have testing for Celiac disease by taking blood tests for celiac disease, start a strict gluten-free diet if you are positive, and then diagnose with celiac disease.

Blood Tests for Celiac Disease
The main blood tests for celiac disease are based on antibody tests. Anti-tissue transglutaminase test, or anti-tTG test, is the first screening option for antibody testing. tTG is an enzyme that is involved in the breakdown of gliadin—a water-soluble protein in gluten that's essential for bread to rise during baking and that is easily absorbed by the intestines. The most sensitive screen is for anti-tTG immunoglobulin A (IgA). People who are IgA-deficient due to other autoimmune disorders such as lupus or rheumatoid arthritis, then you may be tested for anti-tTG immunoglobulin G (IgG) rather than anti-tTG IgA. An at-home anti-tTG IgA test is available by several lab providers.

Other blood tests for celiac disease include:

You should note that in order for the blood tests for celiac disease to be accurate, you must be eating gluten at the time of testing.

Other Testing for Celiac Disease
It is possible for someone with celiac disease to have negative antibody test results. If your tests were negative, but you continue to experience symptoms, there are several other methods for testing for celiac disease.

Testing for the Celiac Genes
Two chromosomal mutations, HLA-DQ2 and HLA-DQ8, were identified as associated with celiac disease. The HLA (human leukocyte antigen) gene is encoding to a cellular protein that triggers an immune response. With celiac disease, aberrations in the HLA coding can cause the immune system to react in the presence of gluten and attack cells of the small intestine. Having the HLA-DQ2 and HLA-DQ8 mutation doesn’t mean that you have or you’ll get celiac disease. About 30% of the U.S. population has one of these mutations, but only around 3% will develop the disease.

If you have celiac disease symptoms, but all other lab test results are negative, a positive genetic HLA test can justify starting a trial period in which you’d stop eating gluten to see if your symptoms improve. You can order at-home genetic tests for celiac without a doctor.

Conclusion
Celiac disease is an autoimmune disorder that’s triggered when you eat gluten. It’s also known as celiac sprue, nontropical sprue, or gluten-sensitive enteropathy. It is different than food sensitivity as untreated celiac disease can cause medical complications and trigger other autoimmune diseases. A strict gluten-free diet is the main way to treat celiac. Several testing for celiac disease, including at-home tTG, CPD and EMA tests, are available.  Genetic testing for mutations in the HLA gene can be used if you have symptoms, but all tests are negative or to know your risk for having celiac disease.

Do you know that 50% of people with celiac disease on a strict gluten-free diet still suffer from symptoms?