How Complete is a Complete Blood Count (CBC) Test? 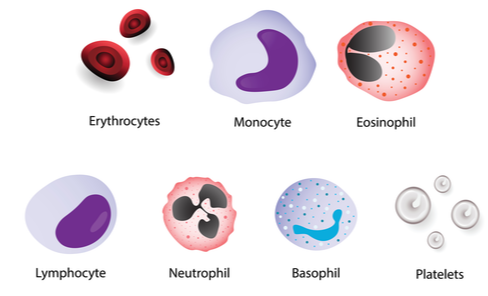 Every annual physical visit, your doctor is sending you to lab work that includes a CBC blood test. Most likely, you already checked and saw that a CBC test stands for Complete Blood Count Test. But you probably asked yourself—“What is a CBC blood test?" or How complete is a Complete Blood Count Test and what does it count?” So, CBC is a blood test that is used as a broad way to evaluate the components in your blood and can be an initial way to identify anemia as well as blood cancers as described in previous posts, as well as infections.

Our blood contains several types of cells. Red blood cells (RBC, also called erythrocytes) carry oxygen and deliver it to our tissues. White blood cells (WBC, also called leukocytes) are part of the immune system and fight infections, and platelets help blood clot, which is critical to stop bleeding when you are injured. Each cell type has a unique shape and size, and historically blood count was done manually under the microscope when a lab technician was counting the number of each cell type in one set of 16 squares (1×1 mm square area). Today, automatic electronic cell sizing and counting are doing this job. A low red blood cell count and WBC normal range can indicate anemia, while normal RBC and high WBC can indicate infections or blood disorders.

A standard Complete Blood Count (CBC) test may also include a platelet count, sometimes called CBC with platelets. A platelet count measures how many platelets you have in your blood. Platelets are blood cells that help your blood to clot (become thinker when you have a cut or injury). The Platelets are smaller than red or white blood cells. If you do not visit doctors regularly or missed your last physical exam, you can still order a CBC blood test online. Based on the blood volume requirement of most automatic cell counters, most lab providers will request you to have an in-person visit to draw blood from your vein (venous blood). Few lab providers are also offering at-home CBC test based on the capillary blood in your finger, which you can do at home. Several studies show that this is possible. Historically, CBC tests for children were done using a finger prick collection and were counted manually but a lab work under the microscope. Recent image processing and artificial intelligence (AI) algorithms were developed by emerging companies like Sight Diagnostics and Truvian, who are developing new analyzers that enable counting your blood cells automatically based on a few drops of blood. However, the Sight OLO is not intended to be used at home for self-testing but at physician offices and clinics.

In case your white blood cells are not in their normal range or hematologic disorders are checked, a Complete Blood Count with differential, also called CBC with diff, is important to further analyze your WBC. Some lab providers are offer full differential analysis as part of their standard CBC test. If you ask yourself—“How should I know if the CBC test includes the differential component?” The answer is simple- labs love to brag… and if they do include other parameters, it will be part of their test description. Fantestico provides this information on the test page. If no further details are provided, you should assume the complete blood count does not include these additional parameters

A CBC with diff test provides the Percentage and Absolute counts of each white blood cell type. This is the reason it is called “with differential,” as it counts all the WBC subtypes and the relative level of each different WBC type.

A single CBC with differential test doesn’t tell the whole story of what’s going on in your body. However, adding the differential results to a standard CBC test may indicate certain conditions. Below is an overall summary of what could be the reason for the increase or decrease of each of these five types of white blood cells.

You should remember that this table is not complete and should not replace a proper consultation with your doctor or healthcare professional. A diagnosis should be done in conjunction with your medical history, symptoms, and physical exam. You can be proactive but never rely on yourself alone for serious diseases and conditions.

A six-part WBC differential parameter that is sometimes included in some lab CBC with diff reports is Immature Granulocytes, or IG, both the IG % and IG absolute counts. An IG (immature granulocytes) report normally includes metamyelocytes and myelocytes—the precursors of neutrophils (precursors are the compounds or things that come to a step/steps before the main product in a chemical/biochemical pathway).  IGs, as their name reveals, are immature white blood cells that were released from your bone marrow to your bloodstream. In other words, IGs are white blood cells in an early stage of development that are not usually present in significant amounts in your blood. An increase in the absolute and percentage amount can indicate several potential diseases and conditions.  IGs are associated with infections, several types of inflammatory disorders, cytokine therapy, neoplasia, hemolysis, tissue damage, seizures, metabolic abnormalities, myeloproliferative neoplasms (MPNs are types of blood cancer), marrow metastasis, and with the use of certain medications such as steroids.

On the other side, there is no health issue associated with low granulocyte counts. A higher-than-normal number of white blood cells is called leukocytosis. Leukocytosis occurs during normal pregnancy and pregnancy-associated leukocytosis may also show increased immature granulocytes without a clinical significance1,2.

Finally, additional tests may include in this lab work, but normally it would require that you or your doctor specifically order these additional tests as part of your CBC, which otherwise are not part of the standard complete blood count or the CBC with differential. These tests are related to your platelets and include Mean platelets volume, or MPV, as well as Prothrombin Time Test and INR (PT/INR), which can be ordered online. In some labs, the MPV test includes a test called CBC (includes Differential and Platelets). Again, you should check what each test includes as the completeness of the term ‘complete’ varies among labs. While highly related, the MVP test is different from your platelet count and reported separately-- you can have a combination of a high MPV and a low platelet count, or a low MPV and a high platelet count.

A high MPV means that your platelets are larger than average, which is sometimes a sign that you’re producing too many platelets. Platelets are produced in the bone marrow and released into your bloodstream. Larger platelets are younger, e.g., produced more recently by your bone marrow. Similarly, smaller platelets are more likely to be in your blood circulation for a few days (e.g. older). When someone has a low platelet count and a high MPV level, it suggests that the bone marrow is rapidly producing platelets. This may be because of chronic bleeding or because older platelets are being destroyed and the bone marrow is trying to compensate. There are many diseases and conditions that can cause high MPV levels, including cancer, diabetes, hyperthyroidism, heart disease, atrial fibrillation, high blood pressure, stroke, and vitamin D deficiency. On the other side, a low MPV test means that your platelets are smaller than average and relatively older, which means your bone marrow does not produce enough new platelets. This can happen in aseptic anemia, which has been discussed in previous anemia blog, certain cytotoxic medications like chemotherapy, and chronic inflammation caused by inflammatory bowel disease, which include Crohn’s disease or ulcerative colitis.

Another test in this hematological series is the prothrombin time (PT) test which measures the time it takes for your blood to clot. An INR (international normalized ratio) is a type of calculation based on PT test results. Prothrombin is a protein made by the liver. It is one of several coagulation (clotting) factors that affect your blood to clot (become thick) when you are injured or get a cut that causes bleeding. Your coagulation factors work together to form a blood clot. Clotting factor levels that are too low can cause you to bleed longer or too much after an injury. While clotting factor levels that are too high can cause dangerous thrombosis in your arteries or veins. Symptoms include pain and swelling in one leg, chest pain, or numbness on one side of the body. A thrombosis event can be life-threatening as it may cause a stroke or heart attack. An online PT/INR test helps to find out if your blood is clotting normally. Finally, are the D-dimer test and the partial thromboplastin time PTT test. D-dimer is one of the protein fragments produced when a blood clot gets dissolved in the body. D-dimer is normally undetectable or only detectable at a very low level unless your body is forming and breaking down significant blood clots. PPT measures how long it takes for a clot to form in a blood sample, mainly used to monitor a person's response to anticoagulant therapies.

Your blood cells can tell you a lot about your health conditions related to infections, anemia, and blood disorders. A Complete Blood Count test is a great screening start. But not all ‘complete’ tests are the same. Check the analyses included in each test page to make sure your order is truly what you need. Usually, a Complete Blood Count (CBC) with differential and platelets will include all the parameters and tests above other than the PT/INR, D-dimer, and PPT which you would need to order separately.

Does this complete your hesitation to order a Complete Blood Count Test online?

Online Lab Tests | The Best Way to Get It Done

How do you get tested for STDs? Part II: Sexually Transmitted Viral Infections

Can you Order Lab Tests without Doctor?