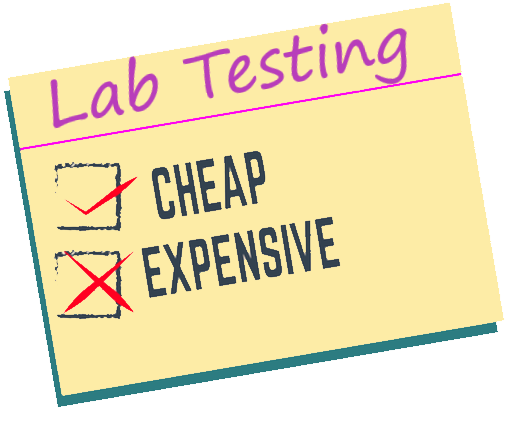 Many people think they will never need free or cheap lab testing, but have you ever thought many people in the U.S. lose their jobs and their finances get messed up rapidly. There are a lot of situations when you can need to find lab testing services that are cheap or free. Some also think they are taking care of their health and won't need any of such services in their entire lives. But the fact is that diseases and disorders are so common now that every U.S. citizen will need lab testing services at any point in their lives.

How Is Cheap Lab Testing Possible?
Do you think cheap tab testing means compromising your health? No way; most urine tests are done with simple chemicals that cost anywhere from a few cents to a couple of dollars. The fact is that if you are getting a urine test, the total cost of the complete procedure, including labor and the analyzers are not more than $7-8, and it will cost you at least 35 dollars at most if you don't have insurance. If you have insurance, the insurance company only pays $15 at most. It's indecent. We understand, but this is how it is.

Similarly, most routine blood tests use inexpensive substances that range from cents to dollars. That implies most of these procedures cost less than that. Even with lab time, most tests are still around $10. Some costly tests, including genetic analysis, are utilized in regular screening or diagnostic workups.

The cost of radiology tests can be broken down in a similar fashion. There is the original cost of the X-ray machine, CT scanner, or MRI, which are usually bought and paid for by the hospital or diagnostic center. In addition, there are the costs of maintaining the machinery (which is usually a fixed annual fee), paying the staff, preparing certain patients for the tests, and the radiologist’s fee for reading the X-ray. A hospital or diagnostic institution typically purchases and finances the X-ray, CT scanner, or MRI machine, so there are also capital expenditures. There are further expenditures for servicing the equipment, paying the personnel, prepping individuals for the exams, and hiring the radiologist to examine the X-rays. Some bodily fluid lab tests also have capital and maintenance expenditures, but still, although the cost level varies depending on the organization's size, the margin is still relatively high.

Why Do Insurance Companies Get Cheap Lab Testing?
The insurance companies are aware of these expenses and aim to pay the minimal amount that the testing organization accepts. Routine blood tests, for example, cost several dollars, while a CT scan or MRI costs a few hundred dollars, but if billed directly, their out-of-pocket can be hundreds to thousand dollars. In general, anyone who doesn’t have insurance, or for people whose insurance claim is denied, will be billed five to ten times what any insurance company would likely pay to the lab provider.

How Much Will They Bill Individuals?
As you may be aware, all tests, operations, office visits, and hospitalizations bill at a much higher rate than the expectations of insurance companies’ actual payments in order to maximize their profits. It means that individuals without insurance may pay five to ten times what their insurer would normally pay. It makes people reliant on their insurance for even the smallest medical costs. Million people in the U.S. don't get appropriate healthcare, not because they can't afford it, but because they don't have insurance or an appropriate health plan that covers their needs. Most individuals can afford these services if they aren't so overpriced if they will buy them directly in a marketplace. However, a cheap lab testing marketplace does not exist at this time.

The table below demonstrates the price range from the lowest, which is typically what Medicare will pay the lab based on their fee schedule, compared to what the labs will bill patients with high-deductible plan or patients whose claim was denials, compared to direct-to-consumers online lab tests. Although the range of online lab tests is vast, it is typically possible to identify cheaper lab tests online compared to typical lab test bills. Adding deduction, co-payment related to the physician appointment, it is clear that online lab tests can be the cheapest option.

With many lab test options from numerous online vendors, it is challenging to identify which test suits your needs the most and compare tests’ functionality and prices. Fantestico solves this problem by gathering information about hundreds of lab tests and providers from across the nation and presenting the available options to you for a simple comparison. As a metasearch engine, Fantestico conducts your thorough search and presents your options, so you can focus on simply choosing which test is right for you. Similar to a travel search engine for identifying the best hotel room deals or flight prices, Fantestico is your search engine for at-home lab tests.

Conclusion
Knowing the factors is the most crucial thing in this case. It lets you handle all the expenses and negotiations related to it. For example, suppose you know the lab tests prices and items used in the techniques. Then, you can talk about the pricing of the test and can get cheap lab testing services. But still, having insurance is the best practice. If you don't have one and still want a test at the lowest prices, look into our online lab tests listings and find the best price for the right testing services that fit your needs most.

Do you know how to find cheap lab tests online?