How to Get Lyme Disease Test? 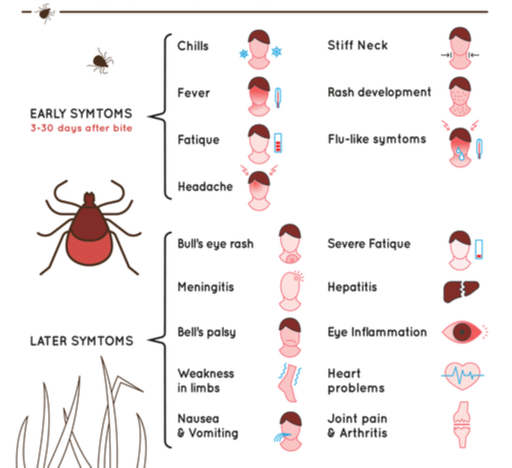 If you have been exposed to ticks, you are at risk for Lyme disease. The bacterium Borrelia burgdorferi is transmitted to humans through the bite of infected black-legged ticks (deer ticks). Typical symptoms include fever, chills, headache, fatigue, joint aches, and a skin rash which has a typical pattern and is called erythema migrans. This characteristic rash happens in 70-80% of infected individuals. This rash starts at the site of a tick bite after 3 to 30 days (7 days on average) and expands gradually over several days, reaching up to 12 inches. It may feel warm, but normally it is not itchy or painful. Swollen lymph nodes may occur in the absence of rash. Since it varies a lot and can be in any area of the body, while some people won’t get this rash at all, it is important to test for Lyme disease if you got a tick bite or have these symptoms without other explanations. This post summarizes how to get a Lyme disease test at home.

Where is Lyme Disease Prevalent?
Although Lyme disease is a year-round problem, April through October is considered tick season. Lyme disease is spreading from the upper east coast, as well as in the upper Midwest. The mode of spread is not entirely clear and is probably due to a number of factors such as bird migration, mobility of deer and other large mammals, and infected ticks dropping off of pets as people travel around the country during the spring season. It is also prevalent in northern California and the Oregon coast, but there is little evidence of its spread. According to the Centers for Disease Control and Prevention (CDC) each year, approximately 30,000 cases of Lyme disease are reported to CDC by state health departments. However, this number does not reflect every case of Lyme disease that is diagnosed in the U.S. every year. Recent estimates using other methods than the standard national surveillance suggest that approximately 476,000 people may get Lyme disease each year in the United States.1. So, let's dig in on how to get Lyme Disease test.

What blood test shows Lyme disease?
Many signs and symptoms of Lyme disease are often found in other conditions. In addition, ticks that transmit Lyme disease can also spread other diseases, so Lyme disease diagnosis can be difficult.

If you ask yourself, “what blood test shows Lyme disease?” the CDC recommends on two-step testing process for Lyme Disease2. Both steps can be done using the same blood sample if the blood is collected in a clinic from your veins. The first test detects the presence of antibodies in your bloodstream to the Borrelia burgdorferi bacterium. This test uses an immunoassay method (either enzyme immunoassay or immunofluorescence type). But because this test can sometimes provide false-positive results, it's not used as the sole basis for diagnosis. If the first test is positive (and even equivocal, e.g., unclear results), then a confirmation test is performed using a Western blot test (also called Immunoblot). The Western blot test separates the blood proteins and detects the specific proteins -- called Borrelia burgdorferi antibodies, that indicate this bacterium infection.

Depending on the time from your first symptoms, the second test is performed. If your signs or symptoms are recent and less than 30 days, IgM and IgG Western blot will be the second step. If more than 30 days elapse since your sign or symptoms began, only IgG Western blot will be performed. The reason is that IgMs are part of our initial immune response and act as the first line of defense, followed by the cellular response and production of IgG. Many lab providers and online lab testing programs are offering the first step as an at-home Lyme disease test.

It is important to know that sometimes it takes several weeks for our body to develop antibodies, so you may test negative if you were infected only recently. On the other hand, antibodies normally stay in the blood for months or even years after the infection is gone; therefore, the test cannot be used to determine that you have been cured. In addition, other tickborne diseases, some viral, bacterial, or autoimmune diseases, can result in false-positive test results.

In addition to the antibody tests, DNA amplification of the Borrelia genomic DNA from blood, fluids, or tissues can support the diagnosis faster.  Because of the sensitivity of the PCR test, the infection can be identified more quickly than using an antibody test.  This DNA PCR test is a qualitative test and will show positive or negative results in one step.

If the disease involves the central nervous system, your doctor might recommend Intravenous antibiotics such as Ceftriaxone (“Rocephin”) for 14 to 28 days. This is an effective treatment that normally eliminates infections, but this treatment can cause various side effects, including a lower white blood cell count, mild to severe diarrhea, or infection with other antibiotic-resistant bacteria unrelated to Lyme.

If the first step is negative, but signs and symptoms are typical of Lyme disease and consistent, you need to consult with your doctor, who might use Convalescent serum (antibodies from blood donated by people who recovered from Lyme disease).

Cost for Lyme disease test
The cost for the 2-steps bloodwork for Lyme disease (e.g., both the ELISA step and the Western blot confirmation) is in the range of $107 to $169. These tests can be ordered online without a prescribing physician but require an in-person visit to a lab or clinic setting to collect enough blood to enable the reflex (automatic continuation to the 2nd step if the test is positive). The first step would cost $44 and the automatic reflex to the second step would cost an additional $63 if the first test is positive. Alternatively, at-home test that collects finger-prick blood are normally sufficient only for the first step. The cost for Lyme disease tests that can be collected at home ranges from $85 to $119. Then you would be able to order online without your doctor the 2nd step (immunoblot) independently at a cost of an additional $60. The cost for the IgG only (signs & symptoms last more than 30 days) is low as $60 and for both IgM and IgG (signs & symptoms last less than 30 days) is $63.

A DNA test using PCR can be ordered online as well at a cost ranging from $169 to $229. This test requires an in-person visit and is not available for at-home collection.

Conclusion
Lyme disease is an infection caused by the bacterium Borrelia burgdorferi that is carried by deer ticks. An infected tick can transmit the infection to the humans and animals it bites. Untreated, the bacterium travels through the bloodstream, establishes itself in various body tissues, and can cause many symptoms. Some are flu-like, but some are more severe. Early treatment with standard oral antibiotics is important to achieve a full recovery and to avoid neurological symptoms and Intravenous antibiotics treatment which is longer and more associated with side effects. Therefore, if you have been exposed to ticks, you are at risk for Lyme disease and it is recommended to get a Lyme disease test. The lowest cost for the first step Lyme disease test ranges from $44 for an in-person visit to $85 for an at-home test.

Are you tick-ready this season?